The (Sometimes Frightening) Roles of Siblings 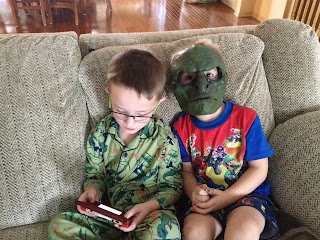 Have you ever given much thought to the birth order of your children? I hadn't until I attended a seminar given on this topic by Dr. Michael Maniacci, a clinical psychologist who counsels families in Chicago and Naperville, Illinois. After his talk, I started to think about the gender and family placement of the family I grew up in, and then turn a critical eye to my own four children.


My husband and I have four (almost grown) children. We have three daughters and one son. And the sibling with the toughest road would have to be my second daughter. Why? Because children want to differentiate themselves from their siblings, and she was the second daughter. Considered the "not so special" placement in our family. Next came my son, who was special in the fact that he was the only boy (a fact that he still resents) and finally our "baby" daughter. The youngest and oldest have a special place guaranteed by their placement in the family.


So what difference does all of this make? Well, being the second of the same gender sibling sets up immediate competition within the family. Daughter or son number two is inherently driven to compete with her predecessor, and due to age and maturity, often times the older sibling has the advantage.


Many of the parents that I have worked with over the years see this competition manifest itself in family difficulties. The older child is usually is comfortable with authority and may be a "people pleaser" and the younger one makes his/her mark by being rebellious, and thumbing his/her nose at how the older child behaves. This is where the sibling rivalry can get ugly and also the role that the second child is ascribed is a negative one. The "black sheep" role of the family is usually a second born and many times second born of same gender.


The true joy of parenting is to see your children grow into adulthood with grounded confidence in who they are and the motivation to reach for their dreams. And you as their parents play a role in helping this scenario to become a reality by nurturing them and allowing them to embrace their uniqueness while downplaying competitiveness.