Warm Heart and Back Bone Required 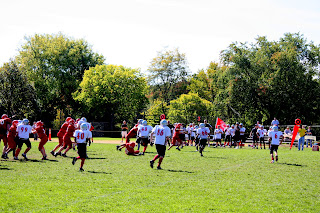 This weekend I had the opportunity to attend my nephew's peewee football game.  As I arrived and parents were unpacking their folding chairs and settling in to watch the game, I heard a child screaming and yelling behind me.  I glanced back in time to see a boy about seven or eight years old, having a full blown tantrum, and his mother bearing the brunt of it.  The boy was very upset about something.  And although he was school age, he was carrying on as if he was a preschooler.  I happen to understand preschoolers quite well, because I teach them twice a week.  This boy was no preschooler, but he certainly could impersonate one!

Anyway, the tantrum continued for at least 10 or 15 minutes.  The mother walked down to the end of the field, presumably to get out of earshot of the other parents.  The child continued to rant and rave, and then started physically assaulting the mom.  He started to slap at her.  Then he tried a few kicks.  And soon, he threw a few punches to her back as she spun around.  All the while, he was continuing to scream and yell and she was trying very unsuccessfully to talk with him, reason with him, plead with him.  I could not hear her words but from her body language she was fully engaged in trying to calm him down.  And sadly, she was so ineffective.

This exchange left me feeling so sad for both the mom and the boy.  I know that kids can get frustrated and act out.  I know that kids can have a bad day and do things they shouldn't.  But I also know that this mother had never fully established herself as an authority figure to this child.  He had no respect for her.  And I am guessing that he has a difficult time in school where he is expected to respect and listen to teachers and show self control.  The long term effects of raising a child with no limits and respect for authority are documented.  Children will have higher incidences of risky behavior and run in to all kinds of trouble down the road.  Children who are raised by parents who combine nurturing and authority are the ones with the lowest incidences of risky behavior and depression rates.

Parenting is difficult.  No one is the perfect parent--they don't exist.  But striving to combine a loving heart with a strong backbone will offer your child the brightest future.  And just as a start, do not tolerate physical abuse from your school age child.  It is unacceptable, just as it is unacceptable for you to slap, kick and punch your child.
Posted by splashparenting.com at Tuesday, September 04, 2012