Try this instead of Elf on the Shelf--it's so much better! 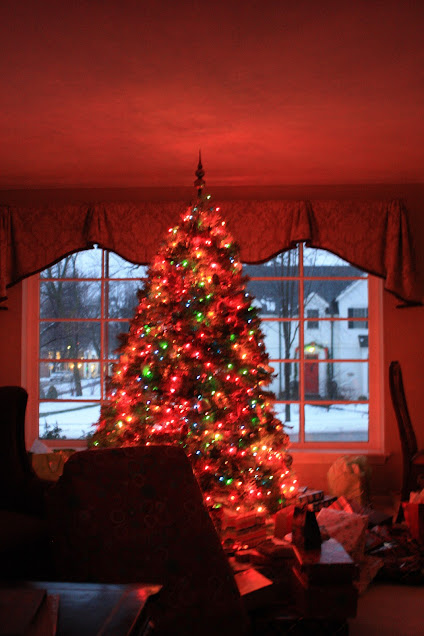 I cannot take credit for this idea, I actually read it in a women's magazine many years ago.  But I can take credit for trying a version of it out on my family.  And now that my children are grown, they will be the first to tell you that it was their favorite family tradition of all time.  Your family must try this idea.  It has so many benefits. It is such a wonderful idea.

So what is the tradition?  Well here it is...every December  1st, our family picked names out of a hat.  The name was Secret Santa Recipient.  You were in charge of performing random, small acts of kindness for that person everyday until Christmas Eve.  You were their "Secret Santa" and each time you did something nice, you tied a bow to our Christmas tree.  The trick was to not let your person know who was being kind to them.  It was a secret.  Then on Christmas Eve our family guessed who the person was that drew their name.

Why was this the best tradition ever?  Well, it was so much fun to watch the tree fill up with bows.  As a mom, it was so fulfilling to think of all the kindness being spread around our home.  Also, this tradition emphasized giving instead of getting.  And, what would often happen was our family members performed extra kind things for others in order to "fake out" their true recipient.  So the kindnesses were multiplied.  And each Christmas Eve was filled with laughter and joking about the kindnesses and who got spoiled the most or least.  The children loved the secret element to hiding a piece of candy in a brother's backpack, or performing a chore for a sister or leaving a loving note (computer printed of course to conceal one's identity) on Mom or Dad's pillow.

As a preschool teacher, I know that the "elf on the shelf" tradition is going strong, but this Secret Santa idea trumps that one in so many ways.  Being someone's Secret Santa doesn't use negative reinforcement to get your children to behave ("the elf is going to tell Santa if you are naughty!"--say so many parents everywhere...).  This idea doesn't focus on what gifts your child is going to be rewarded with on Christmas morning.  Christmas is about giving and sharing and loving and family.  That is why I urge you to give the Secret Santa Tradition a try.  You will be so glad that you did.  My children are growing up, and with two of them away, we really don't have the time together to continue this tradition.  But someday, I have a feeling they might start it up in their own families.  And they will watch the kindness and love being shared throughout this magical season.

I received a message yesterday from a lovely woman who was my youngest daughter's fourth grade teacher.  She wanted me to remind her what our family's tradition was, because she remembered years ago when Claire was talking about in class.  That speaks to the enthusiasm with which my four children embraced this Secret Santa Tradition.  So do your family a favor and try this out.  I guarantee you will be so glad that you did!  And let me know how it works out, too!