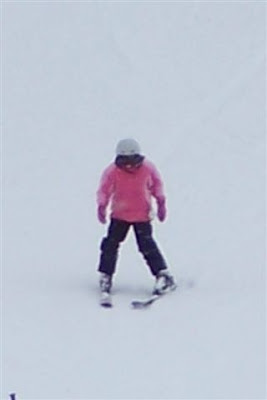 I recently spent the day skiing with my extended family.  My niece, Annie, a first grader was the youngest in the group.  Annie is athletic and bright.  She is competitive and charming and flashes a smile that can melt your heart.  She had skied before but not for while, and as we headed out for our first run, we chose an easy slope, (a step up from the bunny hill) we were sure she could handle.

Initially, we were wrong.  Annie's parents and I were helping her down the hill and after the first few falls, her nervousness was palpable.  This confident little girl was tense and serious and as she grew more and more distraught over her falls, you could see the doubt creep in and her fear and frustration began to take over.  "Keep your ski's straight," encouraged her father!.  "Just follow me, honey" suggested her mother.  But with each attempt, her little body became stiffer with fear, and her face was not registering any ability to listen to her parents patient instructions.  We adults flashed each other a few glances, silently communicating our unspoken fear that Annie was about to do the unthinkable given her personality, and give up.

Suddenly, her older brother whizzed down the run with his cousins.  Annie's jaw became a little less quivery and a little more determined.  She once again stood up on her skis and set her sights on a target of rocks a little ways down the hill.  She started moving slowly and then picking up speed began making her snowplow turns.  Instead of falling when her speed picked up, she tried adjusting her skis and kept heading down the hill.  When she eventually fell, she had made it well beyond her target and the delight in her face was as evident as the snow on the ground.  After that, her confidence grew and by the end of the day, she was literally whizzing down hills twice as difficult as the first one.

So what does any of this have to do with parenting?  Well, it serves as a perfect metaphor for good parenting.  The little girl on the mountain was frustrated and frightened and experiencing failure.  But instead of quickly allowing her to give up or stepping in to take over; her parents encouraged her, made her feel safe and protected but left her to her own devices to figure things out.  And she did.  And the confidence it brought her was immeasurable.


We parents have great difficulty allowing our children to work through things on their own.  We want to take over or allow them to give up when things get difficult.  The secret is to continue to encourage our children, and let them know they are unconditionally loved but then step aside and allow our children work things out.  When they do, the confidence that this brings is truly amazing.  This is a difficult assignment for parents of our generation, but the benefits are incredibly valuable.  You are teaching your children that you have faith in them to solve problems that come their way, and this lesson will prepare them for a  successful life.  What could be better than that?