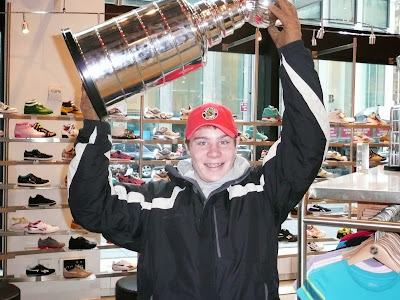 There is excitement in the air, because if you live anywhere near me (in the Chicago area) you know that the Blackhawks clinched the Stanley Cup-The NHL's highest prize, in an exciting few weeks of playoffs, culminating with last night's unbelievable victory--scoring two goals in  17 seconds to come from behind against the Boston Bruins!

It was a hard fought road to the Cup, complete with lots of overtime games, and come from behind victories in championship play that felt more like a battle at times than entertainment.  The fans in Chicago had days recently where they were walking around bleary eyed due to late night overtime games.  But the team played on, and through defeats and injuries and bad calls etc., they continued to put it all behind them and focus on winning that Cup!

My son is a diehard hockey enthusiast.  He played hockey as a young boy and continued throughout his high school years.  He loves watching Blackhawks hockey and was overjoyed at their victory last night.  And all of this has caused me to reflect on what wonderful life lessons parents can teach their children, when they are passionate about a sports team like the Blackhawks.  Besides the fact that it is loads of fun to follow a team with your children.  Spending time together cheering them on forms wonderful bonds and memories. But sports can also help you illustrate important lessons to your young children, if you think about it in terms of teachable moments.  Here are some of the lessons I came up with, but you may have others that will work for you.

1.  Never Give Up:  This lesson was very evident as the Blackhawks pursued the championship.  They persevered.  If your child is easily frustrated, reminding him/her about this quality may help to develop the idea to hang in there and try a little harder.

2.  Team Work:  Team work is important to make any family run smoothly and the Blackhawks gave a great example of working together to accomplish a goal; and sharing credit with all of their teammates on their accomplishments.

3.  Sharing:  This concept is sometimes a difficult one for children to embrace.  Take the opportunity to remind them that a team like the Blackhawks took turns scoring goals and each line of players had to share the puck on the ice in order to achieve success.

4.  Listening to the Coach:  You, as the parent act as the coach of your family.  Ultimately what you say goes.  Sometimes children act as if they don't want you to run the show, but truthfully they do.  The Blackhawks listened to Coach Quenneville even when they didn't want to.  If he said that they needed to be on the bench, that's where they were until he decided they were fit to play.  Every successful family has strong coaches and the players (your kids) need to understand that ultimately you are in charge.

5.  Make Time for Fun:  After the championship, the team rushed back to Chicago to celebrate with the hometown fans.  This morning, I actually saw Coach Quenneville out for breakfast at our local restaurant and knew he had barely had any sleep, but this is his time to celebrate.  This transfers to family life as well, "A family that plays together, stays together" Right?!  So make time to enjoy your kids.  Be silly with them.  Plan outings with them, watch sports with them and relish those important family moments!
facebook.com/SplashParentingPrinciples
Posted by splashparenting.com at Tuesday, June 25, 2013